Browse all items in the collection.  Or visit the digital exhibit Katherine Tyra Branch Library at Bear Creek. 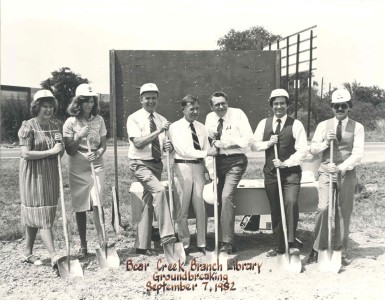 Before the 1980s, the only library on the west side of Harris County was in Katy.  In a 1971 study of the HCPL system, the Houston City Planning Department recommended a new branch built in Precinct 3.  The 1979 Library Bond Referendum provided the library with the funds to create a new branch. The groundbreaking for the Bear Creek branch was held on September 7, 1982, at 16400 Clay Road.

On May 15, 1983, the branch held its dedication ceremony and grand opening, presided over by Commissioner Robert "Bob" Eckels.

On Saturday, November 21, 1992, a tornado hit the library, with 75-100 patrons and staff inside. The building took significant damage and would remain closed for a year, reopening in December 1993.

The building was rededicated as the Katherine Tyra Branch at Bear Creek in October 1999. A passionate reader, Katherine Tyra had served as the Harris County District Clerk from 1991-1995.

In August 2017, the branch was flooded due to the effects of Hurricane Harvey. As a result, a majority of the collection, furnishings, and equipment were lost. After seven months of construction and repair, the branch reopened with a new collection on April 30, 2018, just in time for its 35th anniversary.

View an architectural drawing of the building from the early 1980s.

On Saturday, November 21, 1992, at 3:00 PM, a tornado hit the library, with 75-100 patrons and staff inside. There was no warning of the approaching danger until the power failed - then those trapped inside could hear the high winds and see the dark sky outside. For three long minutes, the tornado moved over the library.

The winds blew most of the roof off the building, and windows were shattered. Soon after, the police arrived and evacuated the building.  While a few people sustained minor cuts, miraculously, there were no significant injuries.

In August 2017, the branch was substantially flooded due to the effects of Hurricane Harvey.  About nine inches of water entered the building, but the real damage was from the heat and humidity after the electricity went out.  By the time the building was safe for staff to enter and evaluate the damage, mold had begun to grow on items throughout the building.

The building needed extensive repairs and a brand new collection. The branch staff regularly held outreach events in the community, including at Clay's Restaurant, H-E-B, and the Bear Creek United Methodist Church.   Over the next seven months, the Katherine Tyra branch staff presented 135 programs and ran 54 pop-up libraries in the Bear Creek community.

The branch reopened with big celebration on April 30, 2018, coinciding with the branch's 35th anniversary. 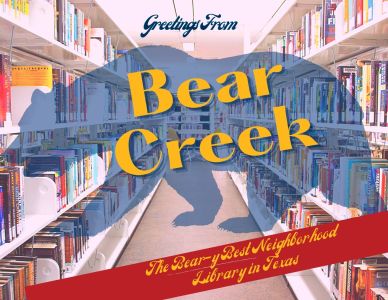