Browse all items in the collection.  Or visit the digital exhibit Katy Branch Library.

The Katy Garden Club founded the first library in Katy in 1918. When HCPL started 3 years later, the Katy community library joined the County system. The library moved around the community and was often placed in private homes.  Mrs. C. W. Douglas's grocery store held the library for more than a decade before it moved to Ed Romack's furniture store in 1935.  Near the end of the 1930s, the station was closed, and the community received only bookmobile service. 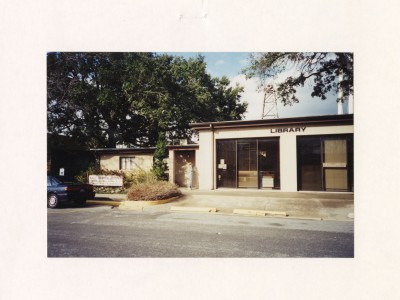 In 1940, Katy residents constructed a 16'x24' one-room building so the community would have a dedicated library building for the first time. The new building had a small porch with an interior finish of knotty pine paneling and hardwood floors.  Students from Katy Elementary School, which did not have a library,  walked over weekly with their teachers to check out books.

A new building was constructed to house both the Katy Library and the Katy Volunteer Fire Department in 1953.  The library was now open 12 hours a week and held approximately 2,000 books. By the end of the 1960s, the book collection had grown to 4,500 volumes, and there was little space for people to sit and read or study.

With the formation of a Friends of the Katy Library in 1973, the library had strong community support for a building expansion. The fire department turned over their portion of the building to the City, and the building was renovated into one larger library space. The renovated library opened in March 1975.

By the end of the 1990s, Katy needed a larger library - there was no space for books and not enough room for programs, especially during the summer.  Staff regularly held programs at the VFW Hall instead. In 2000, a bond issue passed that included funding for a new building on Franz Road.  The new Katy Branch Library opened its doors on April 27, 2003.  It boasts a spacious meeting room, a computer classroom, two study rooms, a large garden, and a courtyard.

The branch celebrated its 90th anniversary in 2011 with a huge party.

Historical Katy: An Illustrated History by Carol Adams for more on the history of the Katy community.

Myrtle Ross started at HCPL in 1970 and worked for several years at the Savannah Collier library station.  In 1978, she joined the Katy Library as the Children's Librarian.  Her storytimes were always popular and she was a constant at the library during a period of intense change and growth.  She retired in 2006.  In 2009, the children's area of the branch was dedicated to her in recognition of her 36 years of public service.

Many narratives written by the branch librarian or manager of Katy over the 1980s and 1990s have been preserved and digitized.  Typically a recounting of the programs offered at the branch, meetings with community partners, and the Friends of the Katy Library, these narratives are often funny and insightful about the day-to-day struggles and joys of being a librarian.