Browse all items in the collection.  Or visit the digital exhibit Stratford Branch Library. 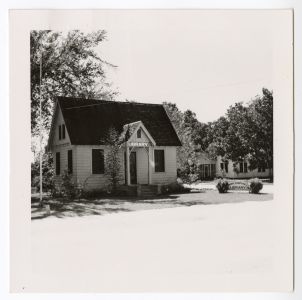 Starting in January 1927, County Librarian Ruth Underwood met with women in the Highlands area to establish a community library.  A small collection of 159 books was delivered in May to a local store that would serve as the HCPL library station for the Highlands area.​  At the end of its first month, the station had a circulation count of 328 - every book had been checked out at least twice!

Soon the Highlands station moved into a room in a newly constructed brick building that also housed the post office. The station was immensely popular, and circulation grew steadily every year.  In the summer of 1936, the library was temporarily relocated to a vacant store when the post office expanded. ​​ The Highlands Garden Club wanted a better library space and raised $600 from the Highlands community for a new 15'x25' building, which railroad owner Harry K. Johnson matched. The new Highlands Library opened on March 13, 1937, and was one of the largest branch buildings in the HCPL system.

Through the 1940s and 1950s, the branch saw steady growth as the community grew and several new schools were opened in the Goose Creek school district. By the early 1960s, the branch was stuffed full of books, and the Highlands Garden Club began petitioning for a larger building.  Highlands resident Anna Stratford gifted land for a library in 1963, and the county began construction of a new building in 1965.  The new 1,200 square foot building opened on March 27, 1966.  The branch was renamed in Anna Stratford's honor.

By the early 1980s, the community began calling for a larger branch. Still, funding was challenged by clean-up measures necessary after Hurricane Alicia caused flooding and wind damage across Harris County in August 1983.  As a compromise, the building was renovated, adding 1,500 square feet to the library building, doubling its size.  The renovated branch reopened on December 16, 1985.

In 2016, the branch celebrated its 50th anniversary in its current location.  During the COVID-19 pandemic, Stratford staff transitioned to virtual programming and provided curbside service to the community. In December 2020, while the branch was closed to the public due to COVID-19, the County installed new flooring in the building, making it ready for customers' return.

Read a history of the Highlands branch written in 1937 shortly after the opening of the new building.

View a detailed timeline of the Highlands branch from 1946 to 1955.

Read a history of the Stratford branch written in 1981 for National Library Week.

Louise Davis became the Highlands librarian in 1931.  In January 1936, Louise's mother Cornelia V. Davis took over as the librarian.  Cornelia oversaw the construction and opening of the new building in 1937.

After 19 years of running the Highlands branch, Cornelia resigned in February 1955 due to illness. Her daughter-in-law Pat Davis and her granddaughter Sherril Davis took over in the interim. Cornelia died shortly after.

The Highlands Garden Club planted a holly tree in February 1956 at the library in Cornelia's memory.

Willie Pennington began working at the Stratford Library as a children's librarian in the 1980s. A lifelong resident of the Highlands, Willie was well-loved in the community and the library system.

In 1994 Willie Pennington passed away after a brief illness. The children’s area at the branch was dedicated to her in November 1995.

Willie Pennington with a child

View all items in the collection related to Willie Pennington 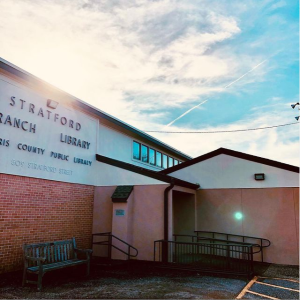