Browse all items in the collection.  Or visit the digital exhibit Maud Smith Marks Branch Library.

In 1984, the Mason Creek Friends of the Library organized to petition for a new library branch in Katy.  Vincent Kickerillo donated land for the building, and by the early 1990s, the County approved funding for a new branch.  The branch was named for Maud Smith Marks, who had owned nearby LH7 Ranch with her husband, Emil. 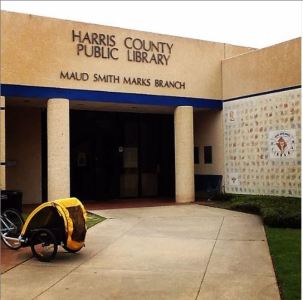 The groundbreaking for the branch took place in October 1991.  The branch opened on July 27, 1993.  During the construction, the renamed Friends of the Maud Smith Marks Library began a fundraising project in which citizens could purchase a handprint tile to be installed on the building's outer wall.  In September 1993, a dedication ceremony was held for the completion of the wall.

In the spring of 1998, the Margie Hudson Reading Garden was constructed in honor of Hudson's work campaigning for the branch during the 1980s and 1990s. In 2000, the branch started preparing for new sections of the handprint wall and announced that patrons could start claiming tiles and sending donations. In July of 2001, the new portions of the handprint tile wall were completed, and there was a dedication ceremony on August 18th.

The branch has held huge celebrations for its 10th, 15th, 20th, and 25th anniversaries. The branch got a monument sign in August 2019, thanks for contributions from the Friends of the Maud Smith Marks Library, HCPL, and County Commissioner Steve Radack.

Read a history of the Maud Smith Marks Library and the Friends group written in 1998.

Historical Katy: An Illustrated History by Carol Adams prominently features Emil and Maud Marks and the LH7 Ranch in Chapter 13.

Maud Smith Marks (1887-1970) ran a small county library in west Harris County. When HCPL started in 1921, Maud collaborated with County Librarian Lucy Fuller to have library books delivered to the Barker community. Marks issued library cards and made sure children in the area had plenty to read.  While Marks passed away in 1970, her devotion to libraries was recognized when the County built a new library for the Katy community in the early 1990s.

Maud Smith Marks's daughters Atha Marks Dimon and Maudeen Marks were Friends and supporters of the library named for their mother.  They regularly attended programs and anniversary parties until they passed away in 2008 (Maudeen) and 2009 (Atha).

The collection includes six scrapbooks containing newspaper clippings and photographs documenting the history of the branch.

Volume 1 (1984-1992) - Focuses on the campaign for a library by the Mason Creek Friends of the Library group (later renamed the Friends of the Maud Marks Library) and the construction of the Mark Mauds library building.

Volume 2 (1992-1997) - Highlights include the library's grand opening in July 1993 and programs, events, and community impact during the library's first few years. Includes documentation from the Wall of Hands Fundraiser.