Browse all items in the collection.  Or visit the digital exhibit Aldine Branch Library.

The Aldine School was a Harris County Public Library station from 1921 to 1943.  The school's collection was occasionally removed when too many books were lost. Usually, after a semester without access to the library, enough books were returned that a new collection would be delivered to the school.  After the collection was removed from the school for the final time in 1944, the Aldine community was on the bookmobile route until the early 1950s. 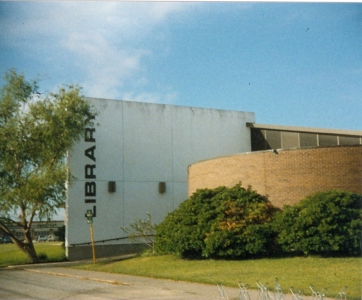 In August of 1983, Hurricane Alicia caused extensive damage to the branch, and it was closed for repairs. The branch reopened on June 4, 1984.  In 1986, the branch hosted an event with beloved author Judy Blume, who had won the Children's Choice award that year.

Shortly after the library's 20th anniversary, the county approved a renovation to expand the building.  After 18 months of construction, the renovated 14,000 square foot Aldine Library was re-opened to the public on September 6, 2001.  In 2002, the library partnered with Commissioner El Franco Lee, the Museum of Cultural Arts Houston, and the Greater Greenspoint District to commission a community mosaic for the library.  The mural included work from Reginald Adams and students from nearby Stovall Middle School.​​

In August 2019, a new interior mural by Houston artist Wiley Robinson was revealed in the children's area.

Read a history of the Aldine branch written in 1980.

Read a history of the Aldine Branch Library written in 1997.

Smile: You Have a Public Library

A day in the life of the Aldine Library in 1980

In the fall of 1980, the Aldine Library staff took a series of 80 photographs of the branch during a busy afternoon.  The project, led by Branch Librarian Elaine Levine, highlights the customers, technology, and behind-the-scenes work at the library. Levine was assisted by members of nearby Aldine Senior High School and the Aldine Independent School District.

The collection includes four scrapbooks containing newspaper clippings and photographs documenting the history of the branch.

Volume 2 (1973-2004) - Focuses on the grand opening of the building in 1976, damage from Hurricane Alicia and the recovery process, and photographs from Children's Choice Award winner Judy Blume's visit to the branch in 1986.

Volume 4 (the early 2000s) - Photographs of children's and teen programs 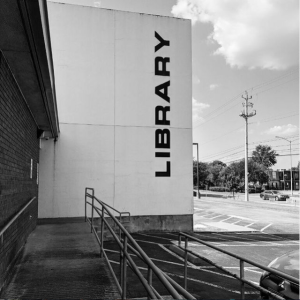