Bookmobile service and outreach in the community have been integral to Harris County Public Library since its earliest days. The vehicles have changed over time, but the mission has always stayed the same: providing free access to books and early literacy tools.

Browse all items in the collection.  Or visit the digital exhibit Bookmobiles.

The Bookmobile Program in the 20th Century 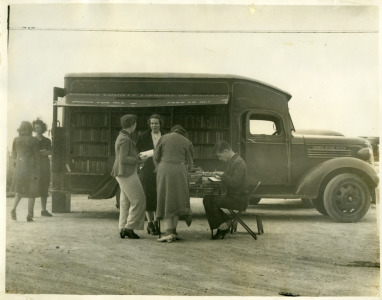 Bookmobile service started in 1921 when librarians traveled hundreds of miles each month to distribute books to rural communities throughout Harris County.  During the first few years, librarians used cars to transport books.  By 1937, the library purchased a customized book wagon from Stewart & Stevenson.

The bookmobile service remained popular through World War II, allowing librarians to continue to reach large parts of the county while the budget was severely reduced.  The library received a new vehicle in 1949 which could hold 2,000 books on its shelves. By the early 1950s, the bookmobile regularly visited over 50 different locations each month. With the addition of a second bookmobile in 1954, the program expanded to 43 community stops and 36 school stops.  That year, the two bookmobiles' circulation was 239,341, only 75,000 less than the combined total for all 14 branches of the library.

After a decade of budget woes, the library purchased a new bookmobile in 1967 to replace the model from 1949, and just six years later, the library secured funding to replace the 1953 vehicle. The two new vehicles could hold a combined 10,000 books and visited 45 community stops every two weeks.  A third bookmobile was added to the program in 1979. This one had the capacity for 5,000 volumes and was painted with the slogan "Books … and other good things," which became the motto for Harris County Public Library.

Since the vehicles drove all over the county, they would occasionally get into accidents. The bookmobiles were regular fixtures at community events and parades, including the Go Texan Day. 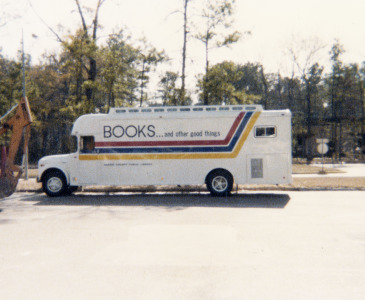 Starting in the early 1980s, the county added eight new branches to the system and renovated or rebuilt several of the oldest branches.  Many of the new branches served communities that were previously served through the bookmobile program.  During this same time, while the bookmobiles continued to provide service to the community, vehicle breakdowns became increasingly common.  By the mid-1990s, the aging bookmobiles needed extensive repair work to continue operating. The library had sought funding for several years to replace the vehicles. However, given the branch system's expansion and the high cost of a new vehicle, the bookmobile program ended in 1999.

21st Century and Beyond

The bookmobile program restarted in the late 2010s with a focus on early literacy.  In partnership with the Barbara Bush Houston Literacy Foundation, HCPL launched the Curiosity Cruiser program in 2017.  The program includes 2 vehicles as well as mascots Owlbotron and Northtale.  The Reading Express began operation in October 2018, designed in partnership with Making it Better.  And in 2019, HCPL launched the first outreach vehicle designed for teens and adults - GRADcafé on the Go.  Created with Project GRAD, the vehicle provides resources for those considering their college and career plans.

Read a history of the bookmobile program written in 1981. 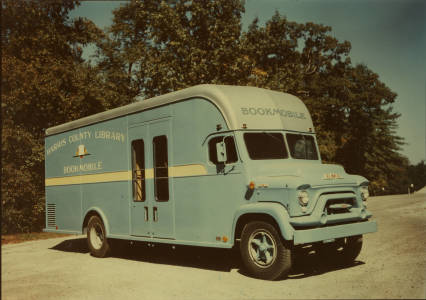